For many residential landlords, choosing a tenant is a gamble — like shopping for a used car without a full history report. Vitaliy Merkulov learned this the hard way. A few years ago, he was looking for tenants for his duplex. After sifting through 20 applications, he found two ladies that seemed like a good fit. Merkulov pulled their credit reports, did background checks and called who he believed was their previous landlord.

“Everything seemed fine,” he says, “but then a month into their lease, I came to pick up the next month’s rent and they said, ‘We’re not going to pay you. If you want us to move out at the end of this month, pay us $4,000.’ They knew it would take three months before I could have the eviction hearing.”

Merkulov didn’t pay. Instead, he took the case to court. He found out the person who he called for a reference wasn’t a real landlord, but one of their friends. It was a well-planned scam. In retrospect, he wishes he just paid them to go away. He says it cost more than $10,000 to cover the rent they owed in addition to eviction attorney fees plus damages.

“They were very professional at lying,” he says. “Why is there a loophole for people to do this?” 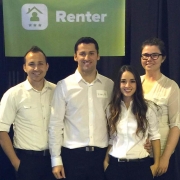 Merkulov set out to fix this loophole last year when he launched Renter Inc. Based in Sacramento, CA, this national web-based service allows landlords to share references about previous tenants so other landlords can make more informed decisions when screening new applicants. No more faxing. No more phone tag. The whole exchange takes place on a centralized database, where landlords can submit and find insights that credit reports and background checks don’t include, such as neighbor complaints, property damages, and lease violations.

In a digital landscape full of websites for tenants to post reviews, Renter Inc helps balance the scales, Merkulov says. Typically, landlords avoid posting references online because consumer reporting laws have strict regulations about what can and cannot be written about tenants. False reports can lead to lawsuits. Merkulov, a programmer by trade, took this into account when he built Renter Inc. He had an attorney that deals with fair housing discrimination look over the site to be on the safe side. There have been no legal issues so far, he says.

“The website is 100 percent legal and FCRA compliant,” he says, referring to the Fair Credit Reporting Act. “Landlords can submit references for free, but these references can only contain factual information.”

Penny Clark, a property manager for Eagle Property Management in Elk Grove, has been real estate investing since 2011. She owns a handful of properties in the area, so she’s had experience trying to get references from landlords. “It’s hard,” she says. “Sometimes landlords won’t answer your calls or they’re reluctant to talk to you. Sometimes you’ve got to go to the courts to find out if there’s been an eviction.”

To build the database, Merkulov is working to integrate his site with software companies that do tenant screening. In the future, he also plans to expand beyond residential properties to include commercial office spaces.

He emphasizes that the website does not replace credit checks and background checks, but gives landlords an additional tool to screen tenants more thoroughly.